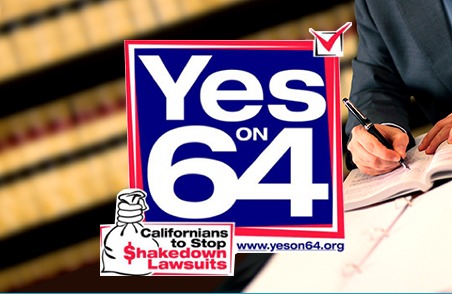 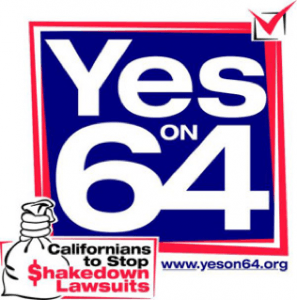 The campaign was highly effective from start to finish. The initial research phase produced a tightly crafted measure that yielded real reform but was still comprehensible to voters. Despite the legal language used in the title/summary and the clutter of 15 other issues on the ballot, Prop. 64 achieved message dominance and maintained message discipline throughout the effort due to aggressive paid and earned media campaigns.

Yes on 64 received the vast majority of editorial endorsements, including a Los Angeles Times article that said Proposition 64 would “restore fairness to the judicial system” and a San Francisco Chronicle piece calling Prop. 64 the “only sure way to end these ‘shakedown’ lawsuits.”

Trial lawyers attempted to hide behind so-called “environmental” groups in their opposition campaign, claiming that enactment of Proposition 64 would “gut” enforcement of California’s environmental laws. Despite a $4 million campaign funded by trial lawyers, California voters saw through this smokescreen. In a stunning victory for tort reform supporters and an equally stunning defeat for the trial bar, Proposition 64 passed with a 59% yes to 41% no vote.